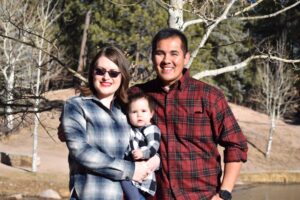 Daniel Bala poses with his wife and baby.

“I was a bit of a shock,” he said. “It was a huge moment. The idea that I could go to an Ivy League was school just so far beyond my frame of reference, I could not imagine it.”

The mechanical engineering student was recently accepted into Princeton University, reaching yet another milestone in his hard-fought journey to and through higher education.

A self-described “army brat,” Daniel moved around a lot as a child but calls Colorado home. After graduating from Liberty High School in 2012, he enrolled at PPCC to continue his education. He enjoyed the small class sizes and the friendly community but eventually ran out of cash for tuition. That’s when he decided to follow the family tradition and join the U.S. Army.

“Lots of opportunities presented themselves—one of them being the ability to pay for school,” he said of his time as a service member. “When they sent me home, I went back to Pikes Peak, knocked out a couple classes, and just grinded away.”

As part of his associate degree program in general studies, Daniel took an introduction to engineering course and was instantly hooked. He talked with his advisor and switched to the mechanical engineering program that would allow him to transfer to the University of Colorado Colorado Springs.

While PPCC is a college like others where many students get their start, it is the staff and faculty that truly makes it world class.

“You get to be really-hands on and build. It was just a free-for-all of ideas,” he said of PPCC’s engineering program. He and his classmates recently worked on a NASA-sponsored project to launch a probe to the edge of space, measuring weather atmospherics. “We got to build, we got to code, we got to solder, and we got to design. It was really the full engineering spectrum.”

As Daniel advanced in his studies, his TRIO advisor Ash Owen set an even greater challenge—to shoot for an Ivy League institution. She connected him to Service to School, an organization that supports veterans in applying to selective colleges and universities. Daniel chose Princeton due to their strong community college transfer programs.

While Daniel admits the application process took patience and hard work, he’s quick to give credit to the PPCC community.

“I could not have done it without the large support network of teachers and faculty who helped me beyond their normal responsibilities,” Daniel wrote in an email to PPCC president Lance Bolton. “While PPCC is a college like others where many students get their start, it is the staff and faculty that truly makes it world class. All of my success is a direct reflection of the environment that has raised me, my PPCC family.”

With his Princeton acceptance in hand, Daniel now faces another fork in the road. He and his wife, who have a 15-month-old daughter, are currently deciding whether to move to New Jersey or stay in the state. Daniel was also accepted to Colorado School of Mines, a top engineering school in the country.

Regardless of where he ends up, Daniel knows he’s on the right path. He offered this advice to any community college student dreaming of that Ivy League degree.

“Go for it—the sky’s the limit. It’s going to be hard now, but you can do it if you push.”