If you had told Leah Porter she would become a Harvard graduate 10 years ago, she wouldn’t have believed you.

Back then, Porter was busy raising her two children in Denver as her husband traveled the country for work. Going back to school was the last thing on her mind.

Now, the Arapahoe Community College (ACC) alumna has a Master’s degree in Education Leadership, Organizations, and Entrepreneurship from Harvard’s Graduate School of Education.

“Being the first one to finish high school and the only one of my siblings to get a Bachelor’s degree, and now a Master’s degree, seems so surreal,” she said. “I’m hoping to inspire my children, my family, and my community to think about higher education and go for institutions that may seem out of reach.”

Porter and her four sisters grew up in Malaysia with limited education opportunities. Her parents never learned to read or write and relied on Porter to interpret important government documents—a skill that carried her through high school.

From community college, I learned to be the leader. Being unafraid to knock on doors, ask questions, question the system, and not settle for what you see as “available.”

With dreams of attending college, Porter moved to Singapore but struggled to save enough money for tuition. She soon met her husband and began traveling the world with him—from Puerto Rico to Israel to the Czech Republic—ultimately landing in Denver with their two children.

That’s when Porter realized going to school wasn’t just an aspiration: it was necessity. Without a credential, she couldn’t secure a good job. She also wanted to set an example for her young children, who were beginning to question whether they belonged on a college campus.

So, Porter set off to ACC as a part-time student, working toward an associate degree in business. Navigating college as a first-generation student wasn’t easy, she said, especially since she was breaking from traditional expectations for women.

“Both my family and I made sacrifices for me to stay in school,” she said. “I think I questioned myself a lot—am I being selfish? But I know that by going to school, I’m also going to make my children’s lives better because I’m equipped to support them along their journey and be a role model for them.” 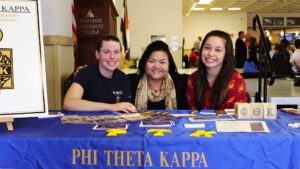 At ACC, Porter blossomed. She joined Phi Theta Kappa (PTK), an international honors society for community college students. ACC’s PTK chapter, Sigma Phi, racked up awards for their academic projects and research and was named the among the top 10 chapters of 1,300 across the globe.

Porter also immersed herself in student government, honing her skills to organize and advocate for students like her. A colleague recognized her leadership ability and encouraged her to run for the vice chair position with the State Student Advisory Council, a student organization that represents all 13 CCCS colleges and advises the State Board for Community Colleges and Occupational Education (SBCCOE). To her surprise, Porter won the seat.

“While I was on the board, I learned so much,” said Porter, who served as a non-voting member on the SBCCOE. “It was very interesting to find out about the policies, governance, and how many people are so involved and passionate about helping the underserved, marginalized community finish college.” 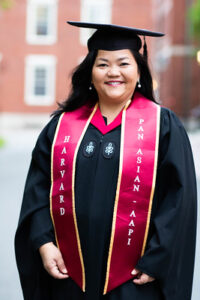 Porter graduated with a Master’s degree from Harvard University’s Graduate School of Education this spring.

By now, Porter had caught the bug for higher education. In 2017, after graduating with her associate degree from ACC, she transferred to the University of Colorado Denver (CU Denver) to achieve her Bachelor of Sciences in Business Administration degree, double-majoring in management and human resources. With newfound confidence, Porter became a relentless advocate for first-generation and transfer students, and was even invited to speak about her experience during a Campus Conversation event.

Armed with a Bachelor’s degree, Porter then set her sights on a graduate school—and the Ivy League.

“I reached out to so many people—more than 30—to look at my application, and I received a lot of positive support,” she said of mentors from ACC, the Colorado Community College System (CCCS), and CU Denver. “This community was able to get me ready to apply to Harvard, and I was accepted into 11 graduate schools that year.”

At Harvard, Porter says she leaned on skills she picked up at ACC: finding the courage to ask questions and collaborate with others. Porter and classmate—a fellow community college graduate—launched groups for first-generation and community college students, through which they convened a panel called “Community College Connections: Myths and Truths” that featured CCCS chancellor Joe Garcia.

Porter, center, with her two children.

In May, she crossed the commencement stage as a Harvard alumna.

“From community college, I learned to be the leader,” she said. “Being unafraid to knock on doors, ask questions, question the system, and not settle for what you see as ‘available.’ It set me up for my education at Harvard for sure.”

After taking a long-awaited trip to Malaysia and Singapore to visit family, Porter is just beginning her job search. She plans to push for improved higher education access and resources for first-generation, transfer, and underserved students, focusing on retention and completion. And she hopes she can inspire more adult learners like herself to reach higher.

“Don’t be afraid to fail and dream big,” she said. “Reach out, because there are many people out there who can’t wait to help you be successful.”