George Villalobos first realized he could be a first responder when he sprang into action after a friend cut herself on glass.

“It was pretty bad, and everyone was freaking out. I walked up to her and asked someone to grab me a bandage and wraps. I put pressure on [the cut], and everyone was just standing around watching me. Eventually I said, ‘We need to take her to the hospital.’”

Villalobos is often the one to step up in crisis—a skill that inspired him to become a firefighter. The 19-year-old joined Arapahoe Community College’s (ACC) Emergency Medical Services Academy this fall to start his career journey.

“I thought you could just become a firefighter, but then I found out that you need to become an EMT (emergency medical technician) or a paramedic first,” he explained. “I went the EMT route. It was just the first step of everything that I want to do.”

As he wraps up training this month, Villalobos will become one of the first Colorado Community College System (CCCS) students to graduate under the state’s Care Forward Colorado program, a $26 million initiative that covers tuition, fees, and course materials for short-term healthcare training. More than 1,000 CCCS students have received funding for dozens of programs across the system, including phlebotomy, dental assisting, and certified nursing, among many other disciplines.

[Care Forward Colorado] saves so much stress and pressure on my life and lets me be more focused. I was able to pay attention in my lectures, my exams, my scenarios, and my ride along trainings, knowing I didn’t have to worry about work constantly.” – George Villalobos

For a first-generation student like Villalobos, the financial support was a gamechanger.

“It saves so much stress and pressure on my life and lets me be more focused,” Villalobos said. “I was able to pay attention in my lectures, my exams, my scenarios, and my ride along trainings, knowing I didn’t have to worry about work constantly.” 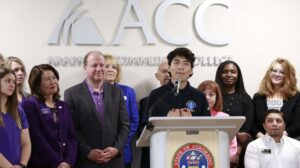 Over the four-month program, Villalobos practiced everything from treating traumatic injuries and asthma attacks to responding to heart attacks and delivering babies. Beyond technical skills, students also learn how to file patient paperwork correctly and deliver tough news to those involved in traumatic incidents.

“What really stood out to me was being sympathetic instead of empathetic with patients—comforting them when they have just suffered a loss,” he recalled. “They’re going to get mad at us, and that’s okay, because ultimately, we did what we could, and that’s part of the grieving process.”

With basic training under his belt, Villalobos is preparing to take his licensure exam, which will allow him to practice medicine in Colorado. Then, he plans to work as a 911 first responder or interfacility transporter while continuing his training in electrocardiograms and IV drips—ACC courses also covered by Care Forward Colorado funds.

As Villalobos takes the next step in his career, he credits his parents for providing the support he needs to support others in some of the most stressful situations in their lives.

“They’re very proud of me. They have my back no matter what, and that’s what I need.”